"Korah's Hargis heads above the rest"

Korah Collegiate's Carina Hargis capped off a tremendous high school sports career with the 2016 Percy Bedford Award. The prestigious award is presented annually to the top graduating female athlete in Sault Ste. Marie. "When I went to my first banquet last year, I saw that (Janis) Hogan had won it while she was in high school, so that definitely made me want it a bit more." Hargis excelled as a five-sport athlete during her four years at Korah, participating on the girls's basketball, volleyball, soccer, badminton and track and field teams. "I had a lot of fun and most of my friends I made through sports," said Hargis. "If I could do it all again, I would do everything the exact same way. I'm very happy." 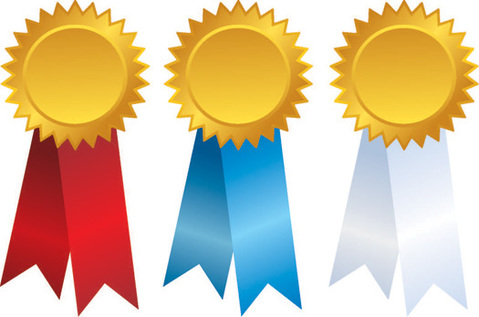 This past weekend, our senior IB colts had an excellent showing at the 29th Annual Rotary Science Fair. Our group won the best senior school team award. 3rd place senior award went to Eric Weise, second place senior award went to Sam Wier. Our top finisher was Dante Severini who not only placed first in the senior division but also won the best in fair award for the top project as well as a $1000 entrance scholarship to Algoma University. Dante will be representing Algoma at the Canada wide science fair this May in Montreal. Congratulations to all of our participants this year. The science department is proud of you all! 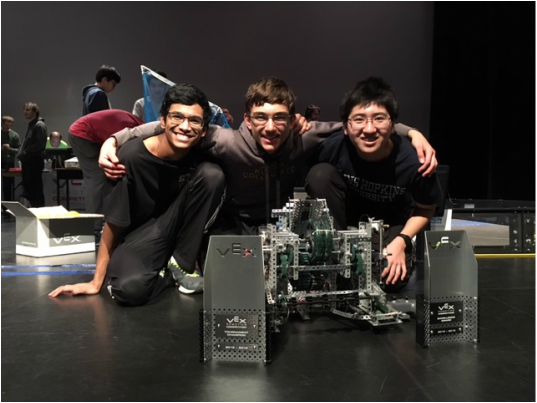 The Korah Coltbotics Robotic Team performed well this past weekend. They competed at the National Capital Vex Robotics Competition Qualifying Event in Ottawa on Saturday, Jan 15, 2016 and earned a birth at the Provincial Championships. They were awarded the Prestigious Excellence Award and Tournament Champions Award given to the best overall team.
The team placed 3rd during the Robot Skill regular round and then won the playoff round with their Alliance. In Robot driving skills they placed second. They are extremely excited with their result and would like to thank everyone for their support. Coach Mr. Lawrence was very please with the team and said they represented Korah and ADSB very well. Team Members were: Terry Bariciak, Rohit Garudadri and Daniel Kang (pictured above). 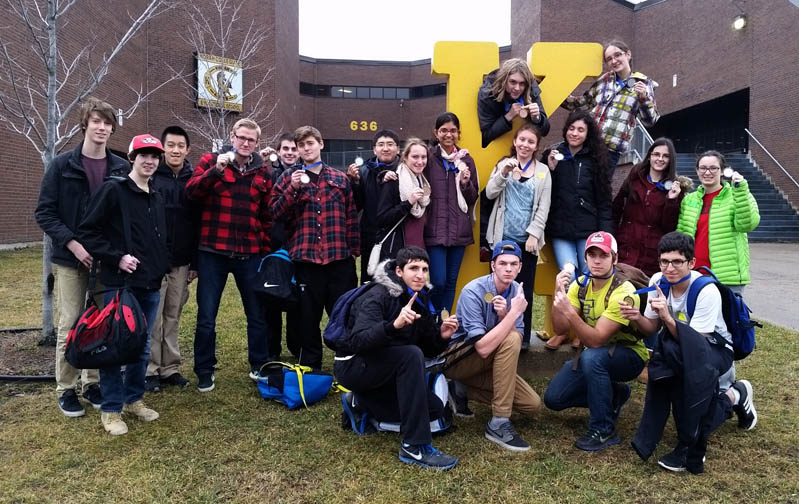 An annual event run by Science North, held at Algoma University, teams of students from all local high schools competed in science and engineering activities.
Korah students took home the all of the medals in the senior division, with the gold medal team of Daniel Maione, Michael Maione, Mitchell Jalak and Shane Charron. Silver went to Wyatt Parr, Daniel Kang, Josh Burns and Adrian Lasook and bronze went to Jordan Winter, Amanda Matthews, Morgan Cordell and Akansha Seerui. In the junior division, the Colts took silver with the team of Kasia Dubreuil, Isabelle Gagnon, Gabrielle Turgeon and Daria Humeniuc." 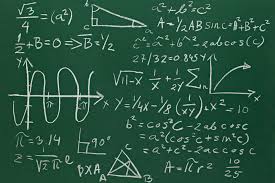 The following is a list of the top scorers for the University of Waterloo math contests:

In the grade 9 contest, the Pascal, the medal winner is Isabelle Gagnon

The Pascal team came 3rd in our zone.


In the grade 10 contest, the Cayley, the medal winner was Morgan Cordell.

The Cayley team came 3rd in our zone.


In the Grade 11 contest, the Fermat, the medal winner was Evan Williams

The Fermat team came 2nd in our zone.


In the Grade 12 contest, the Euclid, top score for Korah goes to Erin Lee.

The Korahsters made it to the Provincials for the Kiwanis Music Festival. This has never been done by a high school from the Sault before. Also the following students made it to the provincials in Voice.  Winston Sullivan, Evan Williams and Gabrielle Turgeon. Evan Williams was the top student for Musical Theatre.
ALGOMA REGIONAL SCIENCE FAIR

Congratulations to all of the Korah students who participated in the Rotary Regional Science fair over the weekend.  This has been our best show ever, with Korah winning both the Intermediate and Senior trophies for best school.  The intermediate trophy was hard won as our single intermediate entrant, Jordan Winters, competed against an entire class of students from Superior Heights.

Individually, prizes were won by the following students:

·       Avery Newman Simmons won the most deserving Senior Project from the University of Ottawa, a $1000 entrance scholarship

And the top three prizes of the fair were, for the first time ever, all taken home by Korah students:

·       In addition to placing 3rd place overall and winning the $70 Cohen Family Memorial Award and Trophy, Sarah Gelmych won the $60 second place in the Senior division.

·       Both Emily and Jordan are eligible to attend the National Science Fair in May in Fredricton, New Brunswick.

On behalf of the science staff, we thank all participants for their hard work, some of it going back to last May.  You have all represented Korah with true Colts integrity.  All science fair participants are invited to a team pizza party tomorrow in room 313 at 11:30. 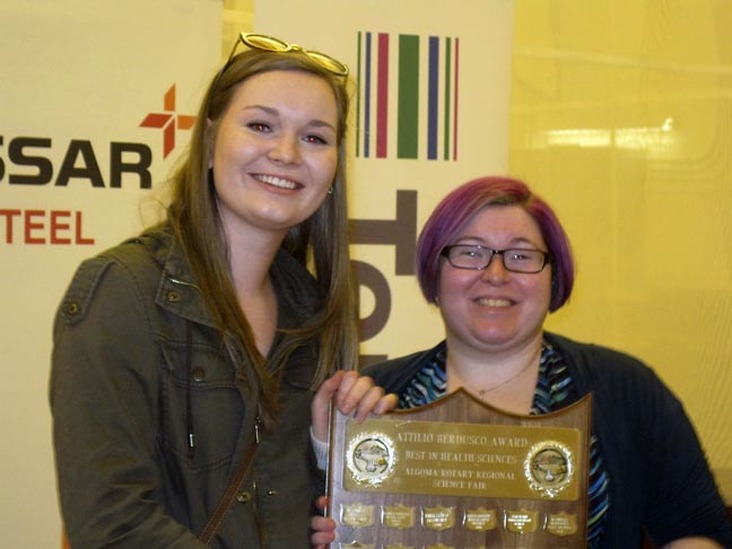 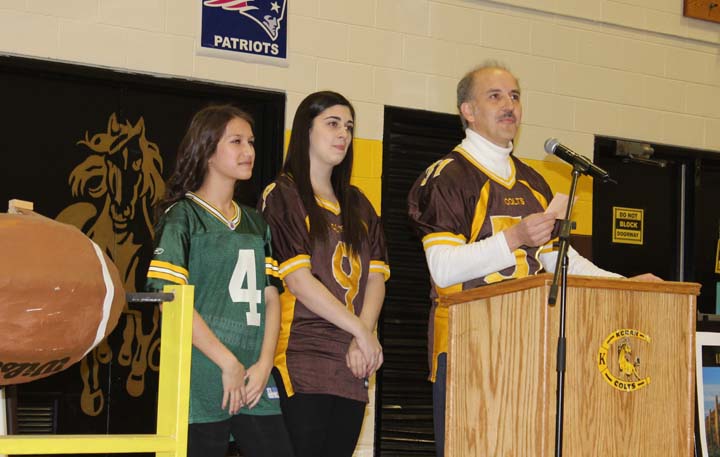 Congratulations to Cathy Chaput for winning the 2015 Superbowl Draw. Sofia Meligrana, and Courtney Dukes along with Mr. Iacoe announce the lucky winner. Korah sold more tickets this year then any other raising $31,000 for student activities. 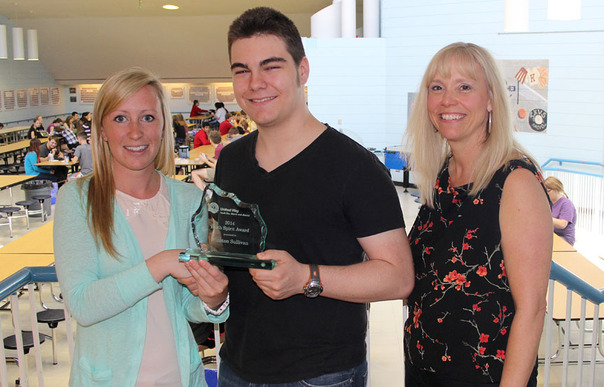 The United Way Youth Spirit Award is presented to an individual youth or a youth group that demonstrates excellent support to the community through participation, leadership, and service to the others within the community. Presented to Winston Sullivan by Kaitlyn Irwin of the United Way, right and Mrs. Williams, left. 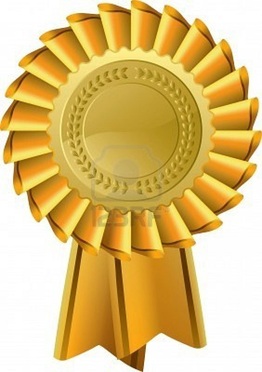 Female ACT/Tenaris Athletic Banquet
Last night at the Marconi our school was represented by 8 outstanding student athletes in their respective sports. Tianna Palumbo was our basketball nominee. Cross country was represented by Sabrina Marsh. Hilary Prouse was our volleyball standout. Laura Masters represented us in curling. Paula Brzezinski was Korah's nominee for wrestling. The doubles team of Danielle Ciotti and Hilary Prouse represented us in badminton. Cameron Mihell was out nominee in track. Emily Groulx was Korah's representative for the prestigious Harvey Morrison award which is a combination of outstanding leadership and athletics. Hilary Prouse was our nominee for the Percy Bedford award which goes to fine outstanding female athletes.
All our girls did an outstanding job this year and a specific congratulations goes out to Danielle Ciotti and Hilary Prouse for being the best across the city in badminton. Hilary Prouse was also the volleyball winner. To top it all of, Hilary was also the recipient of the Percy Bedford award for Sault Ste. Marie's outstanding athlete for 2014. Great work everyone!


Male ACT/Tenaris Athlete Banquet
﻿Last night at the Annual Rotary Banquet, Korah was represented by 10 outstanding athletes for their respective sports,  Football: Nick Nicoletta, Cross-Country: Spencer Bordin, Hockey: Zach Quesnele, Basketball: Anthony Iacoe, Curling: Justin Rhude, Wrestling: Brett Lacasse, Badminton: Austin Kirkwood, Soccer: Liam Train, and Track: Andrew Jones. Austin Kirkwood was Korah's B'nai Birth nominee for combining athletics and academics. Sam Ivey was our Walter Lowe nominee for best all around athlete. A special congratulations goes out to Anthony Iacoe and Brett Lacasse for both being the best across the city in basketball and wresting. Great work to all of the nominees!﻿
The results are in! A few weeks ago, several grade 11 students wrote the Avogadro Exam, a chemistry exam open to grade 11 students across Canada. This year, for the first time ever in Korah history, Can Cui achieved a mark in the 96th percentile and a highly coveted t-shirt. Honorable mentions go to Winston Sullivan, Noah Janson, and Erin Lee. Great work everyone!
Congratulations to all off the following award winners in the University of Waterloo math contest:

In grade 9, the Pascal contest, top score and medal winners are Kaila Jodoin and Morgan Cordell. Certificates of achievement were also won by Kaila and Morgan.

In grade 11, the Fermat contest, top score and medal winner is Can Cui. Certificates of achievement were won by Can and Winston Sullivan.

Peter Larue won the $50 Essar Steel award for best in computer sciences,
Anna Reich won the $50 Sault Naturalists award for best natural history project.
Jacob Dale also won a $50 Sault Naturalists award for Best Green Thinking Project.
Austin Kirkwood was the recipient of a $70 award for the best health sciences project.
Emma Aslett won the $50 Superior Digital Solutions award for best use of mathematics. She also won
the 3rd place senior award of $40.
Laura Masters won a $500 Algoma University Scholarship for Most Deserving Senior Project and she
won a 1st place senior award of $80 as well as the 3rd place Overall award of $70.
Daniella Febbraro won a $1000 University of Ottawa scholarship for most deserving senior project as
well as a $60 2nd place senior award. Daniella won 2nd place overall in the fair and is a Canada Wide
Fair Attendee
Once again, a stellar showing by all of our students has earned Korah the Alfred Askin Shield Award for
the Best Senior School. Congratulations to all competitors.

Student athletes had an outstanding night at the city wide banquet. Congratulations to out rotary nominees Stephen Maloney for x-country, Peter Greve for football, Cameron Slater for wrestling, Riley Graham for curling, Dylan Clarke for soccer, Anthony Iacoe for badminton, and Jarret Litalien for track & field.

A special congratulations goes out to Eric Simon and Anthony Iacoe who were the winning recipients of the hockey and basketball rotary for Most Outstanding hockey and basketball players across the city.
Korah made history at this awards night.  For the first time ever at Korah Collegiate Anthony Iacoe and Peter Greve swept the two most prestigious awards at the Rotary Banquet.  Anthony Iacoe  was the recipient of the Walter Lowe Trophy which is the most outstanding athlete across the city for 2013 and Peter Greve was the recipient of the B/nai B’rith Award for the Best Student Athlete combing academics and athletics across the city.

Korah was the recipient of the Ross Winslade Award for the Best Athletic Program in the city for the third year in a row.  See above photo.

Congratulations to all the girls who represented Korah at the ACT Female Athletic Awards banquet. Erin Lee for x-country, Riley Hogan for basketball, volleyball and badminton, Hilary Prouse for badminton, Cam Mihell for track, Daniella Febbraro for soccer, Laura Masters for Curling, Maggie Waters for wrestling and Teija
Humalamaki  for graduating athlete.
Special congratulations to Laura Masters for the second consecutive year winning the curling award, and Riley and Hilary for being named top badminton players. Riley has won the ACT badminton award the last 4 years which is an ACT record. Great Work Colts!

Congratulations to all of the students who wrote the grade 12 Euclid math contest from the university of Waterloo. This year's top score and a medal went to Chloe Halpenny. The team score placed Korah fourth in our zone. 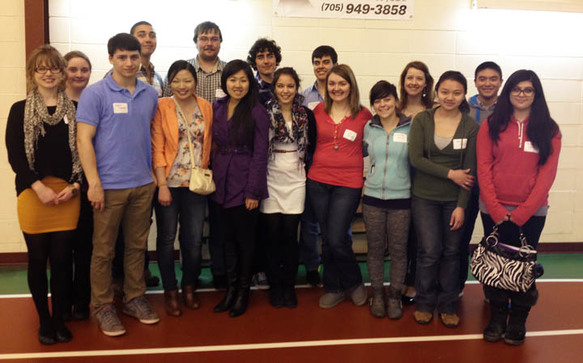 TAKE THE WHEEL. HELP YOUR SCHOOL. 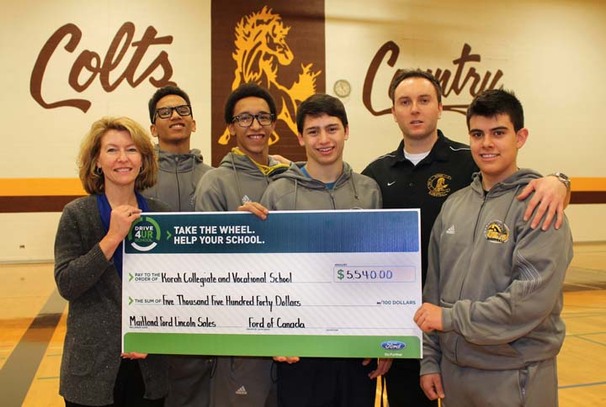 Ms. J. Kovala of Maitland Ford presents a cheque for $5,540.00 . Members of the Korah Boys senior basketball team and hockey team put on the fund raiser.  A. Ivey, S. Ivey,  P. Greve, coach Giovanatti and A Greco accept on behave of Korah.